Indian School Al Ghubra (ISG) emerged victorious in the football tournament hosted by Indian School Muscat on September 3. To commemorate the special occasion of 75 years of India’s Independence, ‘Azadi Amrit Manthan’, 14 Indian Schools across the Sultanate of Oman participated in both the U-19 and U-13 categories. In a nail-biting finale, ISG swept to victory against the host school, ISM, with the final score at 1-0. With this resounding victory, ISG was rightfully crowned champions in the U-19 category. The ISG U-19 team comprised Janav Sridhar Gowda, Kartik Sujan, Joshua Reji, Ruble James Mathew, Pranav Nair, Yahya Jamal, Mihir Mohan , Alan Saji, Fadi Sulaiman, Ammreswaran Soma Sekar,Uday Pisharody and Ziyan Solkar. Another highlight of the tournament was that the U-13 ISG team faced ISAM in the final. After an intense battle, ISG was declared runners-up at the end of the penalty shoot-out. The management and staff of Indian School Al Ghubra congratulated the stupendous effort of the teams. Principal Papri Ghosh commended the sportsmanship and competitive spirit of the players, football coach Murugan and the Physical Education Department. She encouraged them to carry the winning streak forward. 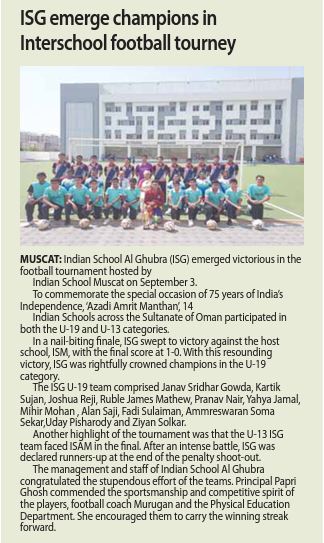