The budding poets from Indian School Al Ghubra made their indelible mark yet again in the International Poetry and Recitation Competition which was jointly organized by DBP (Dewan Bahasa dan Pustaka) and Motivational Strips. Five of the nine prizes were bagged by the literary stalwarts from ISG. It is quite incredible that the students competed with participants ranging in the age group from 12 years to 70 years! The winners competed with entries from several countries across the globe; namely USA, India, Nepal, Mauritius, Turkey, Argentina and the Sultanate of Oman.

The competition had two categories – poetry writing (self-composed poems) and recitation (of the self-composed poems) and the theme of the contest was on the heritage, art and culture of the Malaysian community. Devika Balakrishnan from class 11 and Ayaana Sharique Shaikh from class 8 won the Consolation prizes in the Poetry Contest. Gouri Reghu, Ayaana Sharique Shaikh and Daksh Gulecha, all from class 8, won the first, second and third prizes respectively while Seethalekshmi Kishore from class 9 won the Consolation prize in the Recitation contest. Each of the prize winners has won certificates and cash prizes, too. The young creative geniuses from ISG composed their poems based on the given theme. Thereafter, the poems were translated into Malay, courtesy Dr Raja Rajeshwari Seetha Raman, Senior Advisor for Malay Literature and Translations for Motivational Strips. The poems were also recited by the poets of tomorrow. The entries fulfilled all the parameters of the competition and after going through stringent judgement by renowned poets selected by DBP, the youngsters emerged victorious.

Dewan Bahasa dan Pustaka (English Institute of Language and Literature) abbreviated DBP, the highest literary authority in Malaysia, is the government body responsible for coordinating the use of the Malay language and Malay language and literature in the country. The two stalwarts worthy of mention and who have been strongly associated with DBP are YBhg. Datuk Abang Sallehudin Abg Shokeran, ex Director-General of DBP and YBhg. Prog. Datuk Seri Dr Awang Sariyan, Chairman of DBP’s Board of Governors. The champion of the cause, Mr Shiju H Pallithazheth, Founder and President of Motivational Strips who is associated with DBP must be mentioned for always encouraging ISG students to take part in these events.

The ISG family is extremely proud on the fabulous achievement of the young poets. Principal, Ms Papri Ghosh, lauded the exceptional accomplishment of the students and commended the efforts of the Department of English for recognizing and nurturing the talents of these students. 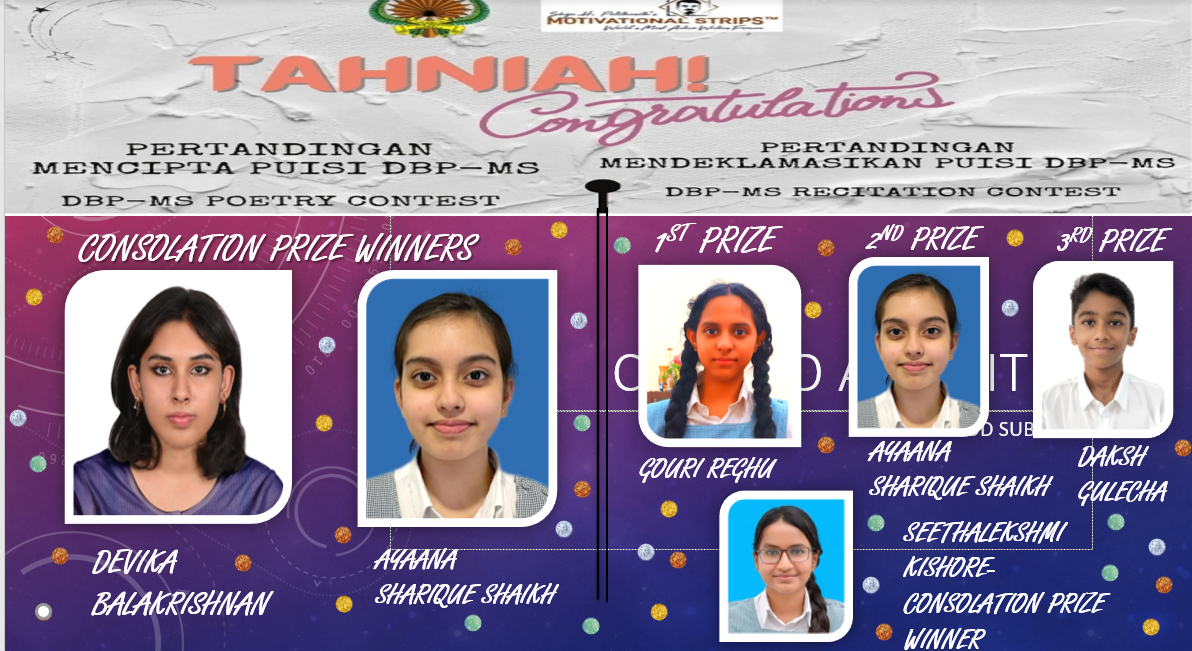