The first ever Virtual Investiture Ceremony of Indian School Al Ghubra was held on Sunday, 4th of October 2020 for the formal induction of its Prefectorial Body for the academic year 2020-2021.

The Principal, Mrs. Papri Ghosh administered the Oath of Office to the newly elected student leaders.

The members of the Student Council from classes 6 to 12 also took their oath of office.

The Chief Guest Mrs. Vanita Uppal in her address expressed her gratitude to the Principal for inviting her to address the leaders. Mrs. Vanita shared leadership lessons learnt and stated that leadership is all about service and sacrifice. She inspired the newly elected leaders to leave a legacy with the combination of a good heart and a good head.

The President of SMC- Mr. Ahmed Rayees in his address highlighted that leaders must have the quality of empathy and an attitude of gratitude especially in these testing times.

This was followed by a prayer for the leaders by the Principal, Mrs. Papri Ghosh. The event concluded with a violin recital by Areena Arun of Class 10. 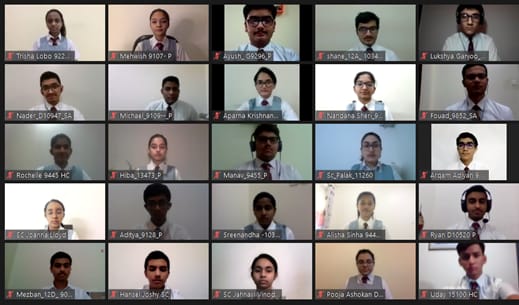