Indian School Al Ghubra conducted the Investiture Ceremony of the Prefects, the House Captains and the Oath-taking Ceremony of the members of the Student Council on a virtual platform on Sunday, the 19th of September 2021.The Chief Guest for the ceremony was Dr. Vijay Datta, Principal, Modern School, New Delhi. Mr. Ahmed Rayees, President of the School Management Committee also graced the occasion with his presence.

The event commenced with the school song in English. The Principal of ISG, Mrs. Papri Ghosh administered the Oath to the Prefects, the House Captains and the Student Representatives from Classes 6 to 12.

The House Captains are Naina Jose and Aashish Arun Desai of Muscat House;

The Principal introduced the Chief Guest Dr. Vijay Datta by highlighting his myriad achievements such as the National Award to the Principal presented by the President of India in 2016, Educationist of the Year Award on the 20th of March 2021 and numerous community service projects initiated during the pandemic, to name a few.

In his address, the Chief Guest Dr. Vijay Datta exhorted the newly invested leaders to step beyond their comfort zone, do their best and lead by example. He emphasised on the quality of resilience and urged the parents not to rely on instant gratification. He also spoke highly of the values that ISG tries to instill in the minds of the students.

Mr. Ahmed Rayees, President of the School Management Committee congratulated the members of the Prefectorial body and advised the student leaders to be compassionate, empathetic and practice gratitude.

The Principal led the Prayer for the leaders. It was followed by the Vote of Thanks proposed by the Vice Principal, Mr. G. Sreekumar.

The event concluded with a violin recital by Joanna Mary Lloyd of Class 8. 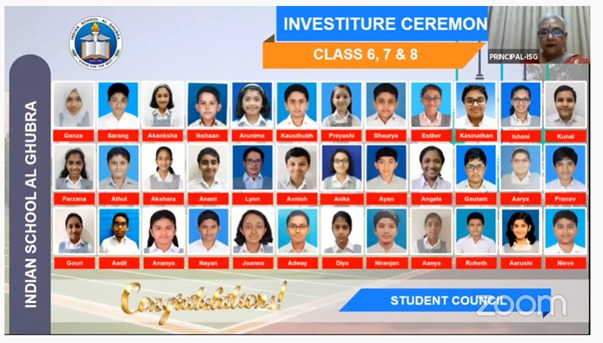