Students of Indian School Al Ghubra celebrated the 72 nd Republic Day of India on a virtual platform on 26 th of January 2021. The comperes Bhumika Poddar and Shreshtha Ranjan introduced the events of the day. The programme began with the National Anthem of India. This was followed by the school choircomprising Aarya Paradkar, Archita Amit, Evangaline John , Malavika Manoj,Mitali S. Dalvi, Roshni Prabhu, Sarah Saju and Sharvari Shetty singing the patrioticsong ‘Baahon Mein Le Leke Khushboo’. The group recital of the poem ‘India –MyMother’ by the students of class 6 highlighted the varied culture, value systemand resilience of the people. The instrumental music titled ‘Maa Tujhe Salaam’ by K.S. Suryanarayan and Shreehari was a treat to the ears. A powerpoint presentation on the Defence forces of India was a befitting tribute to the  guardians of freedom.

A very informative powerpoint presentation by the Students of class 7 showcased the many achievements of India in various fields in the year 2020.Instrumental music was presented by the music teachers of ISG which comprised a medley of popular patriotic songs.

The Principal, Mrs. Papri Ghosh conveyed the news that ISG alumnus of 2003,  Wing Commander Anuj Dabral , was a member of the helicopter team at the fly past ceremony held at the Republic Day Parade at Rajpath in Delhi. The event concluded with the prayer for the nation by the Principal. 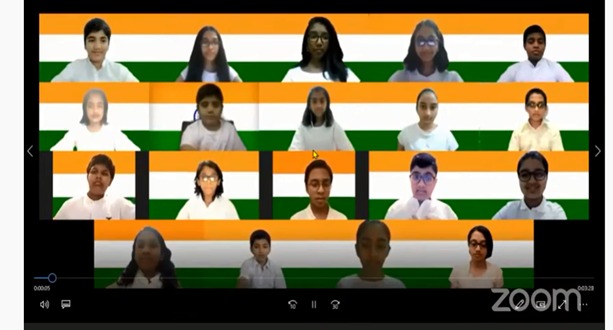